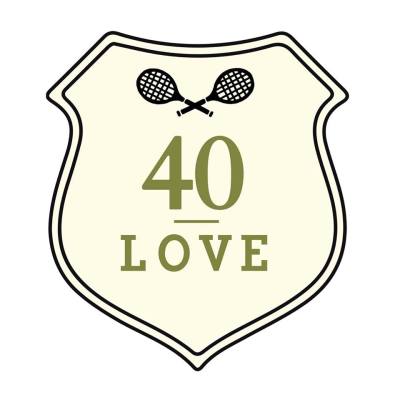 With giant plush booths and over 25 flat-screen TVs, 40 LOVE is the perfect neighborhood sports bar to cheer on your favorite team or grab a bite to eat with friends. Our venue is filled with dark wood, lush greenery and white brick — characteristic of a classic American country club.

Let the bells of excitement ring loud - for King Trivia at 40 Love has begun!

Last night was the first night of trivia at the tennis themed sports bar, and a good time was had by most. (I can't speak to the guy at the bar who wasn't playing, maybe he had a bad night, but it wasn't because of trivia, I promise.) FIVE TEAMS accepted the challenge to play trivia. Some had made reservations to be there. Some sang the praises of a trivia night opening near them. Some ate their french fries and said nothing.

Once the game began, the excitement began. Rounds 1 and 2 were a close game, with every team within 9 points. The winds of change did blow, however, as UCLA dropped out of the race to focus on their conversation. Totally acceptable...but it made that first place ranking even more desirable.

Swedish Fish Oreos took an early lead and never relinquished in their pursuit of the gold. Followed right on their tale - Team Tinette (which Quizmaster Anna mispronounced the entire night - she'll get it right next week, y'all). And not far behind Tinette was The Spanish InQUIZition. With the UCLA's out, we had 4 teams vying for 3 prizes. Victory was so close they could taste it, much like the incredible cocktails you can order at the bar. #NotAnAd. Round 4 challenged our victors with American political history...and we lost another challenger - Eric From Toronto.

So, wait - you're telling me that we had 3 teams fighting for 3 prizes? That's RIGHT. On night one of 40 Love Trivia, EACH TEAM HAD ALREADY WON MONEY. And we were only halfway through!

There were no stakes anymore. Risks could be taken. Wild guesses could be thrown. There could be no losers because everyone had already WON. After much encouragement about these facts, Quizmaster Anna finally got to announce the first successful double down. She thanks you, Swedish Fish Oreos, for giving her that joy. With a 20 point lead, the SFO were almost untouchable. Equally as enjoyable for Quizmaster Anna was the very first unsuccessful double down of her tenure at 40 Love - from The Spanish InQUIZition. Thank you. THAT'S the risk we wanted teams to take! YOLO. You all give me life.

The next few rounds flew by with fun and focus, as Swedish Fish Oreos won with 65 points, Team Tinette in second with 46, and The Spanish InQUIZition at 35.

As Quizmaster Anna said 3 or 4 times last night, we all are best friends and bonded forever and ever and ever. See y'all next Tuesday.