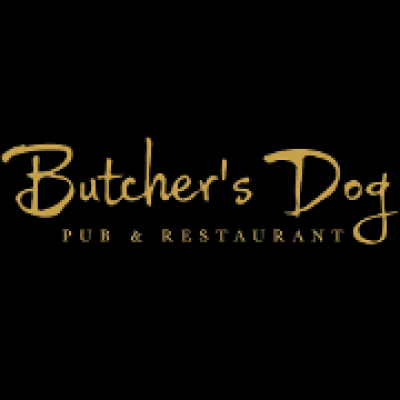 We have 10 large HDTVs and show up to 5 different events on them (we love sports and hope you join us for all the great sports events coming up: UFC, NBA, NHL, Formula 1 Grand Prix, Rugby Word Cup, NASCAR races, Champions League, MLB World Series, etc.).

We have a beautiful patio with space heaters.

We pour great beers and wines, with 18 beers on tap, as well as crafted cocktails.

We have a great Happy Hour menu daily from 3pm to 7pm and ALL NIGHT on Mondays.

'Twas the night before Quizmas, when within Butcher's Dog,The bartender was stirring a brandy eggnog;The answer books and pens laid on tables with care,In hopes that the Quizmaster soon would be there;

The players were nestled all snug in their seats,While visions of drinking rounds pulled them off of the streets;And girlfriends and boyfriends in blue Laker caps,Had just settled down with their platefuls of apps,

When out on the parking lot rose such a clatter,I sprang from my chair to see what was the matter.Away to the window I flew with my beer,On the way I spilled some, but not out of fear.

The moon glinted off of the asphalt so black,Accenting the darkness of each separate car track,When, what to my wondering eyes should appear,But a hybrid Ford C-Max into the parking lot did steer,

With a young handsome driver, singing lively (if pitchy),I knew in a moment it must be Trav Richey.More quiet than owls his hybrid did ride,And he whistled, and shouted, and open'd his door wide;

His eyes -- how they twinkled! all blue they shone bright!His cheeks were like roses, in the chill of the night!His crooked li'l mouth was drawn up like a bow,And I marveled at all of the things he must know;

He spoke not a word, but went straight to his work,He put up the speakers; then turned with a jerk,Turning on the mic he said "testing, one, two",And gave nods to the players both old and the new;

He held up his hands as he read out the rules,Making clear that this venue was no place for fools.And I heard him exclaim, ere he started the game,"HAPPY QUIZMAS TO ALL, AND I'M SO GLAD YOU CAME!"