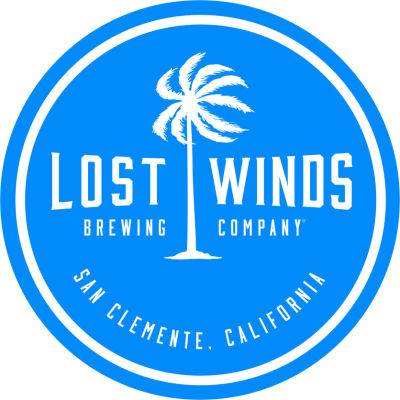 San Clemente locals Tim Thralls, Andrew Mack and Tim Burke, founded Lost Winds Brewing Company on the idea that thoughtfully made craft beer can appeal to the masses – from casual beer drinkers that enjoy lighter ales to craft beer enthusiasts seeking hoppy IPAs, sours, stouts, saisons, and barrel-aged beers. We are excited to introduce you to our line-up with a focus on Belgian style beers.

Lost Winds Brewing Company is located halfway between Los Angeles and San Diego, in a small beach town known as "the Spanish Village by the Sea". San Clemente has long been an idyllic place to surf world class breaks and hit the beach with friends. Tim Thralls, our managing partner and award winning home brewer, together with Brandon Winneker, our classically trained head brewer and Seahawks Junky are now helping to make San Clemente a world-class craft beer destination as well. [MEET THE CREW]

The ocean and the history of our California beach community are central components of Lost Winds Brewing Company. Our brewery is named after a local surf break and beach, Lost Winds, which many don't realize is named after a loose pronunciation of the street that leads to the staircase to Lost Winds Beach, “Calle Lasuen". Lost Winds, LW, Lasuens... all the same beach. Padre Fermin Francisco de Lasuen himself was a Franciscan Priest and successor of Saint Junipero Serra. He founded nine of the iconic missions up and down the coast of California; and he is even responsible for introducing the classic Spanish adobe style ubiquitous around town and at all California missions.

Good surf, a classic beach community, a little bit of California history, and now great beer. We love where we live and can’t wait to see you at Lost Winds Brewing Company!

Go Big or Go Home won first place this week! Two weeks in a row?! Congrats, ladies! Those double downs right off the bat helped launch you to the top!

This Tuesday was Find Your Inner Nerd Day, so we decided to test your video game song knowledge. We created an audio round featuring just 10-second sound clips of all the classics like Super Mario and Tetris and harder ones like Halo and Grand Theft Auto. Two teams got eight out of nine, so we asked a bunch of nerdy video game questions, and Mr. Handsome Face won it!

And to the new team, 7th Place, not only did you win one of Mitch’s Free Beer Shot rounds - but you also finished second! Well done. We hope you use that $15 gift card next week in another game of King Trivia.

Next Tuesday is Jeff’s birthday, so I’m sure we will have something fun up our sleeves. See you then!