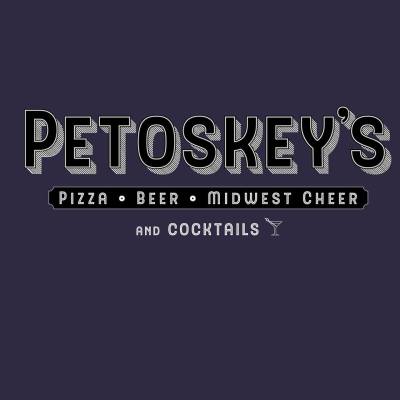 Petoskey’s features an excellent selection of beers and cocktails. Definitely try our Bloody Mary on weekends when we will feature all the Big Ten College games and of course the NFL’s NFC North Division on Sundays.  Petoskey’s is home to the Vikings and the Lions as an ode to Mike Petoskey’s heritage (We think he leaned more purple and gold, but that has long been debated over many Grain Belts and Stroh’s). Of note: The Vikings did tame the Lions during the Vikings era (793-1066).  We do have that Midwest Nice in us, so all you Midwest folk can come and feel welcome to watch your Packers and Bears too.  Seahawks games will also be featured.  NHL and MLB games from all Midwest teams will be televised.

Come on in and feel happy.  We welcome all who want a good meal and a nice beer or cocktail.  Petoskey’s food and drinks are made by friendly cooks and served by friendly bartenders and servers.  That’s what we do dontcha know.

Oh yeah?! What about it? Sure, we were rowdy as all hell but that's the way we like it! In case you weren't able to be here this week, you missed a night of friendly jeering, cheering, and beer-ing. It was all in service of sending out King Trivia's run at Petoskey's in style. Yes my friends, your esteemed host will no longer be holding trivia on Tuesdays, although Petoskey's as a venue may have something in store for you on Wednesdays in the future, so maybe we'll meet again in a different context. But enough with the sad tidings, let's focus on the good times we all shared and dive right into the quiz recap!

We had 6 teams joining me for the grand finale: Chance for a nap, Kevin's still not on our team, NFC Ya Face, Hash Slinging Slashers, I Believe in Miracles, and Cuties Only.

Things got kicked off with our General Knowledge Round 1 and the early results informed us that we were going to be in for a high-risk game of point gambling. Hash Slinging Slashers pulled off a quick Double or Nothing which set the standard for the rest of the teams to try to match. And we all had a good laugh about The South Butt clothing company which, alas, no longer exists as a result of The North Face's lawsuit.

Our Picture Round 2 had teams working to identify the TV shows based on their famous teachers. So whether it was everyone's favorite drug lord Walter White from Breaking Bad or the beloved Mr. Feeny from Boy Meets World, everyone had a chance to represent their particular 'school'. Our the high-stakes competition continued into this round as well, as both Hash Slinging Slashers and NFC Ya Face pulled off a Double or Nothing, cementing their positions as our frontrunners. Just take a look at the scores to see what I mean:

But we still had a lot of rounds left to go, so there was plenty of opportunities for our teams to mount a comeback.

We moved into our Theme Round 3 entitled: "I Am Woman, Hear Me Roar". Let me just go ahead and translate that into game mechanics to simplify everyone's life. Every question and answer involved suffrage or jungle cats. Don't believe me? Well then why don't you tell me what amendment gave women the right to vote (19th Amendment)? Or perhaps you can tell me what the fastest land animal is (cheetah)? Oh you knew all that? Well so did all our teams which is why they all got the same amount of points and everyone's placement stayed the same.

That means it was time for our Guess Who? Round 4 where contestants try to identify a famous person based on a series of increasingly more specific clues. In contrast to prior weeks, our ten-point clues were appropriately vague and prevented anyone from sussing out the identity off the back of their birth name 'Guynes'. In fact, it wasn't until the six point clue revealed their starring roles in GI Jane and The Juror that our teams swarmed me with the answer of Demi Moore. And because everyone guessed at the same time, the point standings stayed the same yet again.

Find the Connection Round 5. The fan-favorite. The chance for the creative teams to demonstrate their out-of-the-box thinking to come up with the unique links tying all our answers together. At least, that's what this round would normally celebrate, but this week our connection was, how can I put this politely, hmm...impossible to guess? So although you may have known that Gateway was the computer company with the cow boxes, that the Milwaukee Bucks play in the Fiserv Arena, or even that Manchester United is known as the Red Devils, you absolutely could not guess that the answers "precede or follow the word star". Yes, hold your pitchforks, I don't write them folks, I just read them, but the connection for those answers looked like: Stargate, Starbucks, Starman. Oof.

Before we head into the final rounds, let's get a quick score recap.

Moving right along into our Handout Round 6, teams were tasked with matching famous TV catchphrases with their associated characters. Hey, wait a minute, didn't we already have a TV themed round back in Round 2...are our question writers overdosing on Netflix again? This was an easy round filled with three successful Double or Nothings for 20 points each by NFC Ya Face, Hash Slinging Slashers, and Cuties Only that put them significantly ahead moving into our final round.

This week's Final Round prompt was:

Who are the ten biological children of Caitlyn Jenner and/or Kris Jenner?

And you all surprised your host with your heretofore unknown Reality TV knowledge as two teams got all ten correct, and nobody got less than six correct. Chance for a Nap even pulled off a Double or Nothing for 20 points, but this valiant last-minute comeback fell short of third place by just one point. Take a look below to see the final standings, but Hash Slinging Slashers, NFC Ya Face, and Cuties Only were our top three finishers at the end of the night.

Thanks again to everyone who has ever stopped by on Tuesdays to help make trivia at Petoskey's so memorable. I loved my time with you every week, and a big extra thanks to those weekly regulars who kept the competition fierce through snow and sun alike. Sharing factoids, friends, food, and fun, what better way to kick it back on a weekday evening? I wish you all the best as we continue our journey through space and time on this big old rock we call Earth.