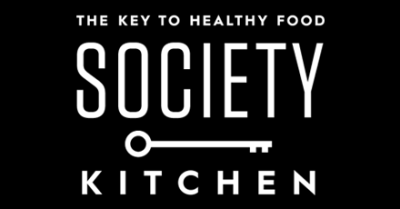 Located in the heart of Santa Monica, Society Kitchen is a local restaurant serving craft beer, artisanal wine, and healthy American cuisine made with local, organic, and seasonal ingredients. We feature the most popular dishes in contemporary American cuisine, fast-casual setting. The extensive menu features our hand-crafted gourmet pizzas, a variety of sandwiches, soups, fresh salads, including our brand of fish tacos. We use only the finest ingredients to prepare our food fresh-to-order in just minutes.

Sunday's game was a game of two sides... inside and outside, thanks to a well-placed speaker, my mellifluous indoors bellowing, and a wireless mic that ALMOST lasted to the end of the game.

Inside? Solo player and quiet storm, Jason from High Society.

Outside? Season 7 champs and Season 9 bronze medalists, We Are Also the Help AKA Team of Enchantment AKA OMG A RETRIEVER PUPPY!!!! Who's a good trivia dog, yes, you are!

Where was I? Ah yes.

Round 4? Is that a blink? Nope, just both teams turning in on the second clue, but kudos to eventual third place team Unicorn Sprout for taking the shot on the 10 pointer and winning the round. 50-50.

It came down to both teams knowledge of European geography to identify the eight countries that border Austria. Would endless hours of globe spinning and playing Where in the World is Carmen Sandiego pay off for our two teams and go to a tiebreaker?

Nope. High Society went 8 for 8, Team of Enchantment missed by 30 miles, which is how far Croatia is from Austria. Final score? 99-98 (including the 1 point pen return bonus). Boom. Ball game.

Kudos also go to father and children triple Humuhumunukuapua'a, which I understand is the state fish of Hawaii and not a team name custom designed to torture poor brunch quiz moderators. They were also perfect on the final round as well.

All in all, a great turnout for an early Sunday afternoon quiz. Hope you can make it sometime... may all your hunches win you brunches, and your knowledge win you porridge!