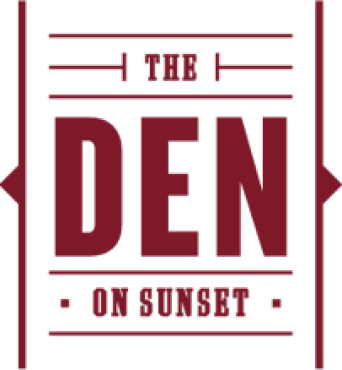 The Den on Sunset

About The Den on Sunset

The Den on Sunset is the perfect place to get together with friends, a date, or to meet new people for a bite and drinks in West Hollywood. We offer select craft beers, wines, and a full selection of liquors, so you’re bound to find your favorite here. Additionally, we offer an extensive menu with a variety of delicious eats from appetizers and salads, to flat breads and sammiches. You've got to try some of our sweet and savory balls such as the mac & cheese balls, bacon & cheese donut balls, Ruthie’s meatballs, or the maple syrup & powdered sugar. Get your green on with one of our salads such as the mixed greens, beet salad, or chop salad. Finish it all off with a sweet treat, our warm chocolate chip cookies.

Join us for our daily happy hour from 5:00 PM – 7:00 PM, Monday through Friday, and 3:00 PM – 5:00 PM, Saturday and Sunday for $3 and $4 draft beers, and $4 wines and well drinks. Our friendly staff welcomes you to our restaurant with a trendy and cozy atmosphere where you can just be you! With our variety of board games, 2 fully stocked bars, flat screens to watch your teams play, karaoke, and back patio with a fire pit, what’s not to love? Come experience the best of Hollywood.

Day 1 of my "TriviMaY World Tour" began here at the fabulous WeHo stylings of The Den. And let me tell you these players were no joke ready to compete. I also found out that the prizes here are absolutely incredible! $25 = 3rd place.....$50 = 2nd place.....$75 = 1st place plus T-shirts! Hands down the best bar prizes I've seen in LA. Everyone seemed pretty amped to get started....

Round 1 had two quick double ups by The Irish Wristwatches and Beyond A Reasonable Stout!

In the picture/Round 2, the teams had to identify the celebrities of drawings which were sketched by 3 year olds apparently. Some of them were absolutely terrible. Bieber looked like Andy Warhol - just so we're on the same page. Nevertheless, Michael Scott Paper Company and Black Jew & Friends didn't seem phased. Both with perfect rounds....but played it safe and did not double-up. Smart move? Perhaps.

Round 3 seemed just out-of-reach of perfection as most teams finished with 5 out of 6 points. Moving into the craziness of....

Round 4. Never have I ever seen EVERY team answer the 8 point question like it was nothing. Nice job, all!

Find the Connection/Round 5 was all sorts of fun...ky. I had to look up a couple of discrepancies within the questions and then actually RETURN answer sheets so they could make the necessary changes. Haha...good times.

I switched up The Drinking Round on them all - mostly because I can and also because I tend to change mine up each week at my residency. So, in honor of the NBA Playoffs (GO BUCKS!), I lined up 4 tumbler glasses along the "Fire Pit of Death" and had them shoot-out for their alcohol. It seemed to go over pretty well and more importantly there were very few people who caught on fire.

In one of the easiest Round 6's I've seen in a while....every team but one nailed the double-up and made it all that much more interesting as we moved into the.....

Final/Round 7. It seemed easy enough "What are the 10 healthiest US states?" Well, it was all fun and games until I announced New Jersey as one of them!

Our 9th place team were the Ladies of G.L.I. who didn't realize how crazy competitive this madhouse was going to get. They left after Round5 and finished with a respectable 27 points.

Ru Kids On the Block went for the Hail Mary in Round 7 (nice strategy!) but missed and finished with a solid 53 points.

Nearly edging them out were the Michael Scott Paper Company with 55 points...

....but Black Jew and all her wonderful Friends had 1 more point to finish in 5th place.

Beyond A Reasonable Stout played a solid, solid game with 69 points.

And then it was the team I kept calling "paper".....Hollywood PRAYER Vigil (HPV) with 71 points - 2nd place just barely!

And the GRAND CHAMPIONS OF THE NIGHT....with 79 points....were.....The Irish Wristwatches!

Shout to The Den and Quizmaster Jason for letting me take over his fun crowd for the night!

~ Quizmaster (of the Trivia Universe) Johnny