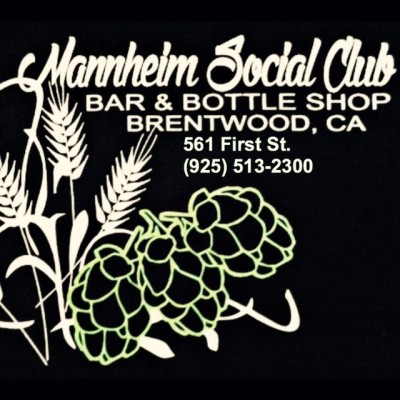 Tonight was another fantastic night with everyone at Mannheim Social Club for Pint Nite, brought to us by one of my personal favorites- Lost Coast Brewery. (scan over the second picture to see what they brought for us tonight- some very delicious and robust flavored brews!)

The Mannheim was very real tonight with our rival teams Prestige World Wide and the Jerkoffz showing off how competitive they are to our newcomers McTeam, our 3rd place team, and Billy's Team who in fact won our Final Question and received a custom metal sign from Lost Coast Brewery!

The game was off to a great start with Prestige World Wide taking a huge leap into first and keeping their lead throughout most of the game but come round 5 & 6, our boyz of the Jerkoffz came up quick on their coattails with a huge Double or Nothing score in round that placed them right behind our leaders. When the dust settled for the night, it just wasn't enough and Prestige World Wide came out on top- this time!

A HUGE thanks to Lost Coast for giving our teams a special opportunity to take home such a great prize! Come back anytime, we'd love to have you guys again!

And the Mannheim continues with another Pint Night with all of my favorites and a few new faces! This weeks pint night was all IPA's from Bake Bottle and might I say that all four had me puzzled on which to choose- all DELICIOUS!

Tonight's winners were Prestige World Wide that had the jump from the get go and kept it up with a attitude to win throughout the night! Just for Fun kept at the leaders with the Jerkoffz at their tails all night, but when it came down to it the guys just didn't quite make up for a couple big risk Double or Nothing plays.

This Thursday was a nice mellow night at Mannheim with the five returning teams (Sorry No Talent Ass Clowns for not quite catching the team number!) and I am glad to say that we are looking forward to the return of our teams and hopefully some new faces for our third week of our King Trivia Championships and stay in touch with our social media for updates on the Marvel Themed Event being held on April 22- check out kingtrivia.com for tickets and more info!

Tonight was a great turn out with a whopping 7 teams, bringing the headcount to 33 players at the Mannheim Social Club this Thursday night for pint night. Tonights Pint Nite was brought to us here for King Trivia by EPIDEMIC ALES.

Epidemic Ales is a Concord-based brewery that have a goal to leave a lasting impression on the very tip of your tongue with their FOUR featured brews enjoyed by the WINNERS of tonight grueling match- The Players to be Named Later racking in a grand total of 62.

These players decided tonight was their night to bring in the title with keeping a lead throughout the whole game with two Double or Nothing plays. The new comers, Wilma Dickfit, brought in the second highest score of 50 with a HAIL MARY Double or Nothing to claw their way past Prestige World Wide, who came to the end with a 43.

In the end, all teams ended the game in laughs and smiles and welcomed the newcomers for another round at Mannheim Social Club next Pint Nite Thursday!

2) Tanner from Prestige WW in mid-conversation

3) The Boyz of The Jerkoffz