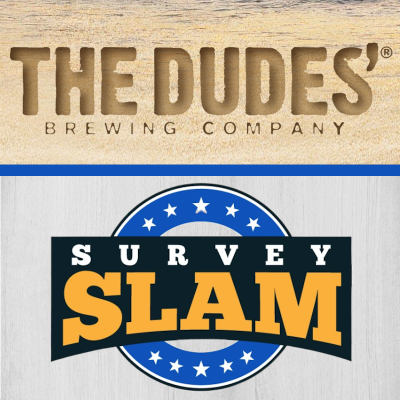 We were back at The Dudes' in Santa Monica slamming' the Survey Slam with 5 incredible teams all trying to guess the most popular answer (or in some cases, the second or third most popular answers) taken from our survey at www.KingTrivia.com/SurveySlam.
Tonight's FIRST place winner, "Kiss Me Richard" went home with a free four pack. Richard played a strong game maintaining a healthy lead from round to round. He was the only team to crush Round 8's double wager round with the only correct answer. He was conservative on his wager, wagering 3 points. But it didn't matter because he won the game by a mile with a final score of 40 points!
BUT I wanna thank ALL the Survey Slam teams for coming out to play including "The Little Lebowski Urban Achievers" for not only having such an epic name but for also jumping in and playing a few fun rounds. I loved meeting "The Fitzpatricks." They stayed on the heels of "Kiss Me Richard" the whole game but wagered and lost the MAXIMUM amount of points in Round 8 losing 10 points. I hope they come back to play again real soon. And one of the more enjoyable teams of the night was, "63419." Thanks for jumping in at Round 2 and playing full steam ahead for the rest of the game. "63419" answered many of our Survey Slam questions in line with the most popular answers. Unfortunately, like "The Fitzpatricks," "63419" wagered and lost 10 points in our final round.
As always, I had a blast hosting and am looking forward to next time!

Well what a fantastically slammin' Friday we had!

We got The Gobble Gobble Gobble all ready to play and they faced the stalwart opponents of The Dukes, who were getting their first-ever foray into a Survey Slam!

We had a very exciting game between these two Survey savvy teams -- as they kept chasing each other with the points and never let the point deficit get too huge.

The Dukes jumped to a lead with 4 points in Round One and The Gobble Gobble Gobble had 2. Then, GGG closed the gap to a 1 point deficit in Round Two, with 6 to Dukes' 7.

The Dukes stayed one point ahead of GGG in Round Three, with the teams tying for the round's score.

Then, Dukes wagered the max 5 for Round Four while GGG wagered 2 and led by 4 points.

GGG led for the first time in the night from Round Five, rising to 27 points while Dukes fell to 25.

They stayed ahead with Round Six, making the gap four points.

Then, Round Seven brought the Dukes closer with just a two point deficit, 32 to GGG's 34.

It all came down to Round Eight, as both teams wagered all ten points.

"What is one novel everyone had to read in school at one point?"

GGG put Catcher in the Rye; Dukes had the winning answer To Kill a Mockingbird!

Happy Thanksgiving To All

Happy Birthday to the Dukes!!!

Other fun aside from tonight -- realizing how many Jrs there are that aren't what Survey takers put but what you guys put:

Guess History is a subject that comes in handy after school, huh ?

Thanks Michael for letting me hold down the fort for ya! And big thanks to Robert and Brandon for all of the positive feedback 🙂

What a wildly fun Friday night of Survey Slamming we had!!

Pee Pee Time held onto their lead from Rounds 1-5, but in Round 5, Kick Cat Bar started to creep up behind them, closing the gap to one point as they named all of the five three-point answers for a score of the maximum 15 at Round 5.

In Round 6, Pee Pee Time preserves their lead, making it a three-point deficit.

However, another perfect round for Kick Cat Bar in Round 7 saw them snag the lead with three more points from Pee Pee Time.

It all came down to Round 8 -- and Pee Pee Time noted The Bronx as the borough of New York that survey takers would least want to visit and wagering ten while Kick Cat Bar ran away with the game by guessing Staten Island correctly AND wagering ten points.

Huge shout out to third place team Ramrod who joined midway and still came out with a substantive amount of points and also shout out to Team Keem, who noted Here Comes the Sun as the best Beatles song and Jesus as the historical figure who would have an amazing Twitter account today. Despite those answers being contrary to what survey takers thought, Survey Czar Sanyee deems those answers pretty great!

And I agree with Pee Pee Time -- chicken and casseroles would be baked! Guess our survey takers have many a sweet tooth with the cookies and cakes and pies!

Also this was my first time at the venue -- I had no idea I'd be blending in with the wall right behind me.