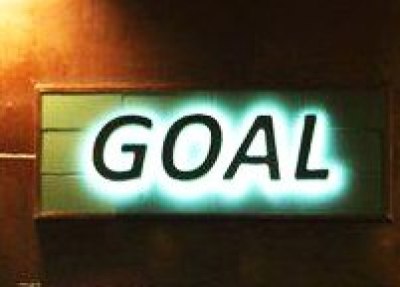 Located in the heart of the West 3rd St. corridor, between Orlando and Sweetzer. Goal Sports Cafe was established to provide a great sports experience. With good people, great food and drinks and an entertainment system second only to being at the game.

What a great showing we had at GOAL for our September Wednesday before autumnal falling into October!

We had our lovely regular teams joined by Ivy alumni who came out to play, repping both Harvard (your QM's alma mater YAY) and Stanford (and Penn) at two different tables!

And of course, we had Mark Dellham Sucks, our most recent grads from USC.

Some fun takeaways from last night -

Y'all don't seem to have ever seen a $2 bill before...many need a refresher course on state capitals because it proved super difficult to guess which state Lansing is the capital for - though you do know your Looney Tunes characters...but the High School Musicals were tough stuff because there were just far too many to choose from!

I know I did Les Mis, Miss Saigon, and Guys & Dolls in my high school musical theater - and none of those were on the list.

But I agree with you guys - high schools should totally do Hamilton. And Wicked.

Bodacious the Bull tripped many teams up with the Hall of Fame he was in (Rodeo!) and two teams both thought our Guess Who? was not Nic Cage but Sean Penn.

All around, a very exciting night as Toby Rollers and GOAL Regulators kept going head to head - but Boardwalk 11 walked away with their successful final double down of the night.

Toby Rollers and GOAL Regulators ended up going into the Tiebreaker - and I had Chris read the answer, which was totally wrong - and we had to check our phones for the right answer because NO Florida does not have 8,436 miles of coastline.

Don't yell at me - I didn't write the question!

Don't yell at Chris - he just read it!

Now he knows how Faye Dunaway and Warren Beatty felt at the Oscars, simply reading what was handed to him LOL.

Anyways, Toby Rollers walked away with Second Place for the night and also won the Drinking Round - naming the most Best Picture Oscar-winners out of everyone in our lovely circle! Speaking of Oscars 🙂

And I walked away happy that everyone gave my mom a happy birthday shout-out for her birthday this weekend!!! Yes, as I write this recap, I am on a 6AM bus back to San Francisco to celebrate her birthday with her.

Or come to GOAL and hug your trivia family! I'm always here!

A hearty congrats to all the wonderful teams who came out to play tonight on a breezy Wednesday evening!

There were so many exciting Double Downs -- especially in Round Two when I <3 Carson Wentz, I Thought This was a Protest, and Toby Rollers went all in successfully. But oh wait, no, it was actually so much more exciting when Mark Dellham Sucks doubled down successfully for Round 5 and knew all their school subjects AND answers! (Though the Anatomy of Russel was a great guess from one team 🙂 ) Mark Dellham Sucks might also be our youngest team at GOAL -- so they're most fresh out of college, still very well-versed in their school subjects. And very good at trivia, giving a lot of teams a run for the title.

Then came Round Six, where we had not one, not two, not three, not four, but a whoppingly impressive FIVE successful double-downs.

What can I say? Y'all watch a lottttta TV. And I mean A LOT.

So we're so glad you can come out and take a break from the TV-watching and play a little trivia every now and then!

Hope your live QM is far more exciting than the characters you see on the TV! Or hopefully you get to see your QM on a TV coming at you soon 😉

Spicey Meat-a-Ball made a big jump from fifth place to tied for first and came down to a tiebreaker with I <3 Carson Wentz.

I <3 Carson Wentz went home with the W, but Spicey Meat-a-Ball, thanks to their savvy double down of MLB teams did end up in Second Place, and Mark Dellham Sucks got to enjoy complimentary very, very, very cool glasses and SWAG from GOAL in Third Place. And yes, they thought it was quite "lit." Haha what did I tell you? The youngest team at the bar -- y'all make the rest of us feel way hip!

AND a big CONGRATS to Toby Rollers who won the Drinking Round -- we had a very good time trying out Survey Slam and they won by 11 points, beating Go Ducks and Dusty's 10 points because they, unlike all the other teams, had faith in humanity -- and believed that people would NOT press a button if it meant someone else would lose $10K just to win $10K for themselves.

And they were handsomely rewarded with a round of free drinks on the house!

How funny was it that all of the teams thought the worst place to propose would be a baseball game / sporting event? Hey -- I wouldn't mind! Especially if my team was winning.

And oh my gosh how cool is it that we had a player tonight who got Jeff Foxworthy on the 8-point clue because she's worked on not one, but ALL the Comedy Central roasts?!!!

Come to GOAL. You'll meet the neatest people. I guarantee it.

Thank you to everyone who kicked off their Wednesday here at GOAL -- we had a very intimate atmosphere, with seven teams circulating throughout the night.

Our newest regular team, Mark Dellham Sucks was indeed in it to win it -- they came prepared at 6PM, even before your Quizmaster got in -- and they blazed forward with their Eye of the Tiger all night long.

Many heads were better than one -- as the whole group of Mark Dellham Sucks -- took the lead from GOAL Regulators by Round 6, edging forward by a point.

That Will Ferrell round, tho! GOAL had a great guess with Nice in regards to the region of France -- but the answer was Burgundy!

And talk about putting your QM through the wringer with pronouncing all of those international independence days!

San-YAY Samoyed came to hold down the fort and play -- and despite being Canadian, had to guess about the Dominion Day (Pre-1982) corresponding with...Canada!

And how about the Drinking Round? We went through 49 of the 50 states and no one could name Mississippi! Just an Aussie was impressive again, holding down the fort into the Final Three.

However, GOAL rep won the Drinking Round by guessing 40 million which is closer to 39,747,267 for the population of California while Mark Dellham Sucks guessed 38 million. Both guessed correctly for Wyoming's 0.5 million population!

It seems like everyone knew their states far better than their National Parks in Utah or Colorado as that Round 7 definitely stumped a lot of teams!

Mark Dellham ended up with the W (and almost left without their prize!!!), and GOAL and Boardwalk 11 battled it out for Second Place. Boardwalk 11 made it to Second -- guessing 261 minutes for the longest time anyone has held an abdominal plank position while GOAL guessed 11,400.

Thank you everyone for a lovely game and let's keep on quizzin'!!!