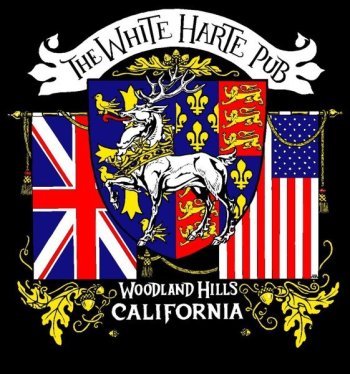 About The White Harte

"A British pub so legitimate that British people actually frequent it, Woodland Hills' White Harte Pub is also popular with everyone from the just-turned-21 crowd to the middle-aged happy hour set."

The word of how awesome King Trivia nights at The White Harte is must be spreading! We had quite a few new comers tonight! I hope you all had as much fun as I did and I hope to see you next week!

Tonight, I held a vote to determine the Drinking Round... "Do you want to relive a childhood classic or play a more... R rated game?" Well, of course EVERYONE voted for the "adults only" option. So we played "Cards Against Sobriety" rather than "Hot Potato." Team Deli won because everyone knows that "50% of marriages end in... Sex with Patrick Stewart!" I mean, when you go boldly where no-one has gone before... you don't go back.

Coming in 3rd place tonight, a team that sounds like they might have the edge if Netflix comes out with an arial based British baking show! Plane Tart! (You don't know, it'll probably happen.)

In 2nd place, with a perfect double in the final round! Our drinking round winners, who know that the best thing is a BMT when the mutton is nice and lean... Sorry, I went Princess Bride for a second. Team Deli!

Oscar De La Hoya might pack a punch, but it's nothing compared to the mental impact of 3 rounds of perfect scores, (1 of which was doubled) of Oscar De La Bob! With an impressive 18 point spread on their competitors!

What a great game tonight at The White Harte! Thank you guys so much, I really had a blast!

For tonight's drinking round, we played a round of King Trivia's new game SURVEY SLAM! Where teams had to guess the most popular answers given by participants of the KT online survey! It was SUPER fun! Eddie and the Cruisers got some drinks with 15 out of a possible 16 points! The only that kept them from a perfect score was they were the only team that said they'd rather fight a horse sized duck instead of 100 duck sized horses!

Coming in 3rd place, a team who packs a punch, just like their namesake! But in a slightly less violent way... Oscar De La Bob!

Winning 2nd place with a tie breaker, a team who usually comes up with a witty, current event related name. But tonight they were Uninspired.

I am blown away by the energy, the competitive spirit and let's face it, the freaking SMARTS of all my players tonight at The White Harte! You guys kick serious ass!

Tonight's drinking round was "The First 15" where I set my playlist to shuffle and played the first 15 seconds of 10 songs. We heard, Tracy Chapman, Led Zeppelin, Weezer, Jimmy Buffet, Nirvana and more. Teams got a point for the band name and the song title for a possible 20 points! Of course the team with a name based on 90's songs won! Scotty Doesn't Know Stacy's Mom got the extra drinks!

Coming in 3rd place tonight, they stared off slow. But they picked up some serious speed at round 5 because the sequel is better and Eddie Lives! Eddie and the Cruisers!

I think that if it was only one Keith involved, he may have made it to 5th or 4th place. But due to the fact that this was a whole team of Keithi's proved that 1 Keith is a challenge, a bunch of Keithi's are a force to be reckoned with!

Tonight's Champions not only won the drinking round but also the trivia game! With a perfect double in round 2 and a perfect 10 for 10 in round 5! Nineties kids will rejoice in the fact the Scotty Doesn't Know Stacy's Mom! One of those references involves Matt Damon! LOOK IT UP!